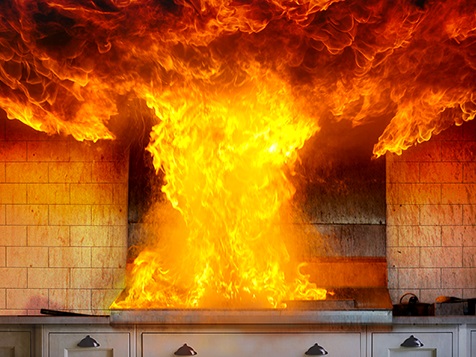 Kitchens are the most common room in the home for fires to start. This is because people cook in the kitchen and there are a number of risks associated with cooking. Every time you turn on your stove or start up one of the burners, you run the risk of starting a fire. Although you may be extremely careful, fires can still happen. Here are the four most common reasons kitchen fires start and how you can prevent fire restoration in the future.

The majority of kitchen fires are the result of inattention or distraction. Taking your attention off of your cooking equipment to check your phone or talk to a family member can be catastrophic. Most cooking requires oil, grease, and heat, making it the perfect opportunity for a fire to start when you aren’t paying attention.

Prevention: The simplest way to prevent fires from starting as a result of unattended cooking equipment is to minimize distractions that may take your attention away from cooking.

As many people of you probably already know, most food burns easily. But burning food doesn’t just ruin your meal, but your food can also easily catch on fire, ultimately ending in a kitchen fire. While some foods are more likely to catch on fire than others, it may happen when you least expect it.

Prevention: Food can catch fire when you are not paying attention to what is happening on the stove. If necessary, turn the heat down, keep stirring the food, and pay attention to how long something has been cooking. If flames from the burner and starting to creep up, remove the food to prevent a fire from starting.

Frying food is one of the most common causes of kitchen fires. Be especially careful when you are frying foods in the kitchen because hot oil can be very dangerous. Again, it is important that those frying pay close attention to what they’re doing to minimize damage. Oil can cause fires if they get too unruly, but also severe burns.

Prevention: Don’t use too much oil. If you feel as though the oil might be getting too hot, turn the temperature down or remove from the heat to ensure everything stays under your control.

While clothing doesn’t pose as high of a risk as other things in the kitchen, it is still a flammable material. As a result, when a spark lands on clothing, fire can rapidly spread. In fact, the National Fire Protection Association reports that clothing ignition can be blamed for nearly 20 percent of all fire deaths related to cooking equipment.

Prevention: Be conscious of what you are wearing when you are cooking. Because clothing is flammable, be mindful of clothing that has long, dangling sleeves that can potentially hang down into the flame. Also, don’t lean too far over a burner that is turned on, as you also risk the possibility of getting too close to the flame and catching your clothing on fire. When possible, wear an apron to not only keep your clothing clean but to protect yourself.

Even when cooks are extremely careful, fires can still occur. If you do find yourself in this situation, it is critical that you remain calm and act quickly. Often, once the fire has been extinguished, there is substantial damage that requires fire restoration to return your kitchen to working condition. At Entrusted, we have experts to help remove the evidence of a kitchen fire, returning your kitchen to its former glory.